Bored of the snow already? Let's look forward to the summer. 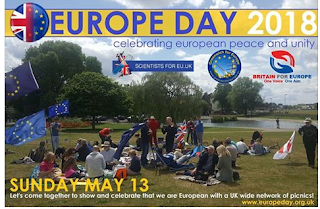 Greenwich for Europe and Britain for Europe are happy to announce a joint national initiative to develop a series of celebratory events marking Europe Day in May. Europe Day, for those who don't know, is an annual event celebrating European peace and unity which takes place across the continent but which has so far been relatively unknown in the UK.

The centre of this initiative, which is supported by Scientists 4 EU with other national groups already expressing an interest, will be be a UK-wide network of picnics on Sunday May 13 - the first Sunday after Europe Day (May 9th). The initiative also seeks to encourage a series of other events from lectures to socials throughout that week.

This is the next step in an campaign started by Greenwich for Europe and Lewisham East for Europe last year, which seeks to encourage the UK to positively celebrate and be proud of our european-ness, and to develop an ever increasing annual Europe Day celebration regardless of what happens with Brexit. We are also in contact with Pulse of Europe to see if we can use this initiative to jump start what they are doing in more cities around the UK.

We encourage all local groups, and likeminded individuals, around the country to set up picnics in their local area, plus any other events they see fit, the week of May 7-13. They will be promoted through our online hub, in the media, and through any promotional material that we create subject to funding.

Come and visit our online portal!

If you are interested in hosting a Europe Day event, or finding out other ways that you can get involved, then please check out the website for further information or comment below if you have any queries.

May 9th 1950 Robert Schuman made his speech outlining his plans for thee European Project. The idea was to make war in Europe unthinkable. The means was to achieve this through economic cooperation. Th result has been the ongoing peace project of the EEC / EU. This was recognised in 2012 when the EU was given the Nobel Peace Prize.

March 19th, "Should I stay or Should I go"  in London
March 17th European Movement Action Day in Tunbridge Wells