Brexit Bulletin - Are you confused? Barnier certainly is! 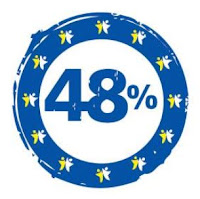 In the world of Brexit

If ever there was a time for a strong visionary politician, this would be it. Cometh the hour, cometh the man. However, as the hours turn to minutes it is probably safe to assume that the hour may have cometh, but the bus service that bringeth the “man” was probably cancelled due to austerity.

We have found out, thanks to governmental reports (which were leaked unpatriotically, didn’t cover the government’s own vision of the Brexit deal, which are probably inaccurate anyway and which everyone should just ignore because IDS does not like them and OOH look! A be-monocled squirrel!) that Brexit is going to be more painful than 2008.

We found out, thanks to Vince Cable on PMQTs, that the NHS, far from getting 350 million pounds a week, is actually probably going to be sold to the Americans. This is so unfunny I cannot even bring myself to be sarcastic about it.

We found out thanks to Buzzfeed that the country is in thrall to 70 far right conservatives (Follow the link for the list of names), organised through the European Research Group (ERG). who are spending our tax money on removing our rights, our freedoms and castrating the country economically and politically. In 2018 the technical term for this kind of political manoeuvring is called “getting back our sovrinty”.

Monsieur Barnier revealed that the EU is confused about the British Government’s stance on Brexit. Which is in equal measure worrying and reassuring to the rest of us watching this never-ending car-crash unfold; we are not alone in our impression of the incompetent cabinet.

The Chief negotiator presented the three options for the Irish border;

- the necessity of border controls that will prevent a hard border. The UK's decision to leave the custom’s union willundermine the Good Friday Agreements
- the UK government’s as yet to be presented solution for a hard border between Northern Ireland and Ireland (it probably almost definitely involves unicorns and leprechauns) or
-the alignment of Northern Ireland with the single market and the customs union.

Basically – there is only one solution, which is, from the perspective of the Conservative government, not politically possible, and their favoured solution does not yet technically exist (Leprechauns being hard to catch this time of year).

Barnier emphasised the transparency with which the EU was dealing with the negotiations and underlined the fact that the EU is working as quickly as possible to help the UK meet the tight deadlines to have a deal and a transition in place within the time frame of Article 50. Compare this to the government’s placing of its Brexit impact reports in a room which may as well be “in the cellar, down some stairs, with a sign on the door saying beware of the leopard” (British transparency) and the fact that the UK government has yet to make any hard decisions, or indeed, make it to the meetings (British timeliness).

He explained that what has been branded the “punishment clause” is the adaption of existing legislation to the timeframe of the transition period, to ensure that the single market is protected and that the UK follows the rules governing the single market or face the same sanctions as any other EU state that breaks the laws established by the community. If I can understand that, why can’t the Daily Telegraph?

It is painfully like listening to a patient father explaining to his hormonally supercharged teenage son why the rules that govern the rest of the household also apply to him. And listening to the teenage son storm off, slam doors, while shouting “It’s so unfair!” a la Harry Enfield’s “Kevin”. Except that teenage son holds the well-being of the UK in his sweaty teenage hands.

Even the transition period is looking shakey. Dropping out of the EU will damage the 27 but it will be nothing compared to what it will do to the UK. Especially a UK that is so woefully unprepared. At present the UK government cuts the same kind of figure as a hedgehog playing chicken with a Robin Reliant. Except that the Robin Reliant is probably a BMW.

In summary, the UK government has gone into yet another tailspin this week; missing vital appointments because of diary clashes (or not having done their homework), putting May onto auto-response to deal with tricky questions in PMQT, and failing to present the nation with a vision, a plan, a hint of where it is wanting to lead us other than OUT! OUT! OUT! Every time the plane of government seems to have crash-landed on some sunlit upland, it turns out that there are still more precipices down which it can fall.

In the world of protest

Open Britain launched a Grassroots Campaigning Group uniting most of the national groups fighting Brexit, only to do what they usually do and ruin it by following a soft Brexit agenda, forcing those groups who are #StopBrexit only to back peddle; notably Best for Britain.

The right wing press were not happy when they found out that George Soros was backing Best for Britain. The man who cost each man, woman and child in the UK 12 pounds a head back in the 90s and forced us to drop out of the ERM and then donated a lot of that money to the former communist states to set up education centres, will be helping us to get Britain back on track. Significantly, none of those complaining about “foreign interference in the UK” are too worried about Putin’s manipulations of the electorate or Trump’s opinions on the politics of the UK.

Adonis took on Rees-Mogg (the modern-day battle between good and evil?) at Cambridge University, and good won,  although seeing as we still have Brexit on the cards and Rees Mogg failed to disappear in a puff of logic, the victory feels rather hollow. Cambridge Stays came out to greet both the participants. (Pictures from the Daily Mail...)
British in the Netherlands took the issue of citizenship to a court in the Netherlands where the case was referred to the ECJ. The next stge of this battle requires funding. If you wish to support citizenship rights for all, here is the crowdfunder.

Brighton and Hove for EU, the EU flag Mafia and the Flags at the Proms team conspired to flood the Eurovision audience with EU flags – so much so that the BBC were forced to use blue lighting in an effort to neutralise the flags. No-one puts the twelve stars in a corner! Not even you, Aunty Beeb!

Leeds for Europe  held two street stalls in Ilkley and Leeds town centre and then hosted a talk at the town hall in the afternoon. Leeds are really turning up the volume on Brexit.

Up and Coming
The BrexitFact Bus will soon start its tours. Having raised 16,000 pounds through crowdfunding, it will be travelling up and down the country to various locations supporting local groups and increasing their visibility. And probably helping convince all those (17.5 million) who won’t believe anything unless it is written on the side of a bus.

The No. 10Vigil is going to be one year old this month – so happy Birthday, you merry band of ‘moaners! We love ya!

Polish up your marching boots; Peter French announced a march in London on October 20th. This will be the third / fourth of 2018; Leeds for Europe is marching on the 24th of March and Britain For Europe are marching on June 23rd.

On the 17th One Day Without Us will be organising protests and actions to raise awareness throughout the country; please visit their website and see if anything is going on near you. The European Movement are supporting them with a day of action as well.

Don’t forget that the 23rd has been nominated a day to wear the colours of the EU; if you have yet to get some pro EU garb, please visit this website … proceeds support Remain causes.

The RegionalRallies are also going ahead again; more news on that is imminent, but that is the 24th of March as well.

And finally, if you are active in your local group or if you have a group of like minded friends around your community, the Great British Spring Clean day (March 2nd-4th) is coming up. We are told so often that wee do not care about our community or our country, that we are unpatriotic. By contributing to this day while proclaiming our support for staying in the EU would work towards contradicting this criticism.