Action Groups - The No. 10 Vigil. No Brexit on our Watch! 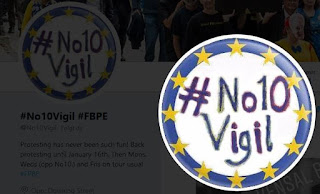 Diane and Caroline, co-founders of No 10 Vigil, met in November 2016 when posing for a “Calendar Girls” style photo shoot for a 2017 Pro Remain Calendar and have never looked back.

In February 2017, having seen how readily people were on the streets to protest against Trump, Diane suggested to Caroline that it should be possible to do the same for the Remain movement, Caroline said “Let’s do it” and so the vigil was born! The initial aim was very simple – get thousands onto the street three nights a week, and to be a thorn in the side of Theresa May and her government, holding them to account.

We continue to be a presence opposite Downing St, letting them know that we will not give up, and providing moral support for pro Remain MPs nearby. We are extremely visual – our way of getting the Pro EU message across. People like to listen to other people, not politicians, and with that in mind we have adapted and honed our skills and are now very active and organised. Fun is a huge part of it all - we would have given up without that!

Now, thanks to crowdfunding support, we can afford banners that will portray this and get noticed. We are innovative and have even gone to festivals trying to change the vibe, through fair weather and foul, and all seasons long we are out there talking singing, shouting our message. We show MPs and many beyond them that we are we are not going away with our continuous and lively presence. We have proved that we are a strong proactive team. We are a central hub and a hive of activity - we are a “go to” for European press along with SODEM.

Sometimes we also go on “walkabouts” around Soho and Trafalgar Square - which always attracts attention, especially when we have the amp! A key role for the Vigil is to talk to passers-by and get them to write to their MPs (and to take our stickers). Wherever we are we  engage Leavers, motivate Remainers, recruit helpers (if they are local to London) and enliven activities wherever we are invited. We have become very adept at getting the local press involved wherever we are! Some weekends we travel to Leave/Remain areas outside London to do the same as in the local areas - soft Leavers will engage once they see Faux Bojo!

As a movement, we must encourage as many constituents as possible to contact their MPs and let them know that they want to stay in the EU. This will be particularly effective in marginal seats. No 10 vigil plans to become extremely good at getting people to do this. We have pulled together a fantastic group of organisers who sacrifice much time and energy to this cause...

...if you are interested in joining us, let us know!